This evening Games & Tea are going to take a look at one of the first games we discovered upon taking up the card/board gaming hobby: Monty Python Fluxx from Looney Labs. 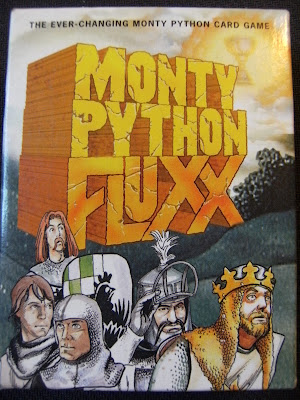 Monty Python Fluxx is one of the many variants on Looney Labs' original Fluxx game, and is obviously themed around the Monty Python films and television series.  As this is Games & Tea's first review of any Fluxx set we'll be going through the game in some detail to establish the system at its core.
Fluxx describes itself as an ever-changing card game, and this description hits the nail firmly on the head.  The rules can change from one turn to the next, the win conditions change, and even the cards you've played have no guarantee of still being there next turn.  To an outsider watching a group of experienced Fluxx players it can seem like quite and intimidating game to try to take on.  But the nice thing about Fluxx is that it was originally designed as a family game, and it's incredibly easy to pick up.  It starts with a very simple gameplay mechanic, and every single card - without exception - tells you exactly what you need to do to play it in nice clear text.  Let's take a look at the cards and we'll be able to see how it all works. 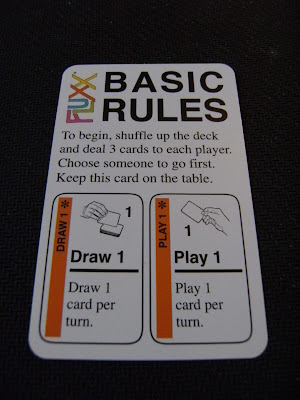 Each player in Monty Python Fluxx starts with a hand of 3 cards, and the only card which starts on the table is the Basic Rules card.  To start with each player draws one card off the top of the deck and then plays one out of their hand.  The card types are: 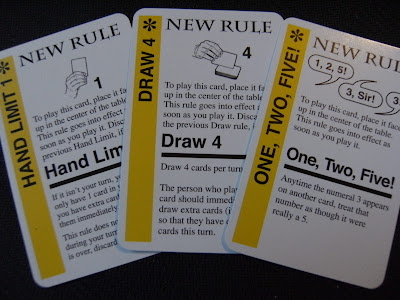 ﻿
New Rule
It wouldn't be an ever-changing card game without New Rules being thrown into the mix every turn.  A New Rule card goes into the centre of the table where it affects all players, and remains there until it is superseded by﻿ another rule of the same type (eg. replacing Draw 4 with Draw 2), or is removed from the game altogether by another card.  There are many different types of New Rule, most of them making changes to the number of cards which are drawn/played each turn, implementing hand limits, giving bonuses to players with empty hands and so forth.  Of course, being Monty Python Fluxx there are also Python-themed rules, such as One, Two, Five! (shown above), or rules which give bonuses for singing Monty Python songs or speaking in an outrageous accent. 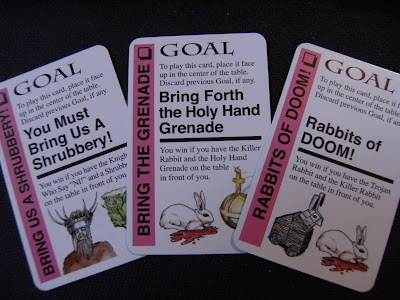 Goal
The Goals are the win-conditions of the game.  Just like the New Rules, when a Goal is played it goes into the centre of the table and takes effect for all players.  Only one Goal at a time can be in play (unless the rules change!), and the first player to reach the win condition is crowned the victor, even if it happens in another player's turn.  In order to win the game, you'll need Keepers, so let's look at those next. 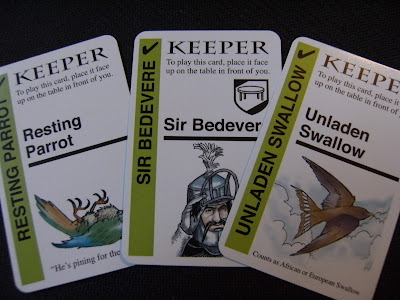 Keepers
Keepers are the various items, characters, and dead parrots from the world of Monty Python.  To play a Keeper, you simply place it on the table in front of yourself, and only you receive its benefits.  All of the Keepers in Monty Python Fluxx are Monty Python themed (and, subsequently, so are the Goals).  There is no limit to the number of Keepers you can have on the table (unless, once again, the rules change!), so players will find it in their best interests to get as many out as possible for when the Goal changes.  If the Keepers in front of you match the required Keepers on the Goal card, you've won the game! 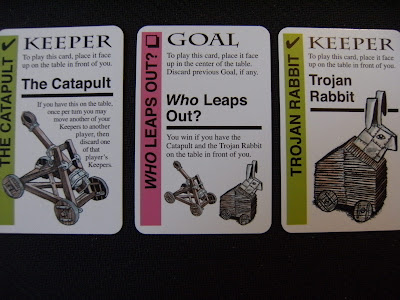 In the example above, the Goal is Who Leaps Out?, requiring The Catapult and the Trojan Rabbit to win the game.  Here one lucky player already has both of those Keepers, and is surely now dancing the Fluxx dance of victory. 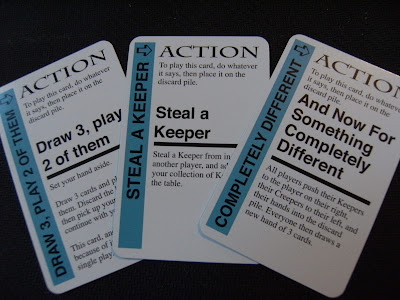 Action
Action cards allow you to take actions which can give a decisive advantage over other players.  To play an Action you place the card on the table in front of you, do whatever it tells you to do, and then place it into the discard pile.  Actions can give players extra turns, allow them to retrieve cards from the discard pile, allow them to steal other players' Keepers, and various other nefarious perks.  Many of the Actions are generic to Fluxx, but there are a few Monty Python-themed ones such as And Now For Something Completely Different, or My Hovercraft is Full of Eels.
These Python-esque cards do grant Monty Python Fluxx the achievment of feeling like a Monty Python game.  Themed versions of existing games often just feel like the original game but with a new coat of paint.  Star Wars Monopoly may look nice on the shelf, but when you're playing it you don't actually feel like you're trading planets in the heart of the Galactic Empire - you feel like you're playing Monopoly with funny writing on the bank notes.  With Monty Python Fluxx the cards are so bizarre, often finding clever ways to make a well-known quote into a game mechanic, that you can almost feel Eric Idle and co cheering you on.
There is one further type of card, which was not in original Fluxx but was first introduced in Monty Python Fluxx, and has appeared in every variant since then. 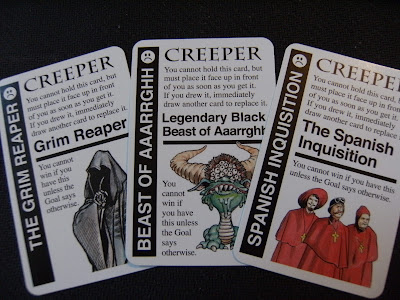 Creepers
Whenever a player draws a Creeper they must immediately put it into play as they would a Keeper, and then draw another card to replace it.  This does not count as one of their plays for the turn.  Creepers prevent players from winning the game, unless the Goal specifically requires that Creeper.  For this reason they have been given the more sinister characters from the Monty Python franchise, including The Spanish Inquisition, The Three-Headed Giant and The Killer Rabbit.
The very nature of Fluxx is one of chance.  There is a small tactical element to the game, but for the better part the winner is decided entirely by chance.  This is a big thumbs-down for a lot of hardcore gamers, and Fluxx has very much become a Marmite game of the specialist gaming community.  Those who do enjoy it tend to do so as a wind-down game at the end of a gaming evening, or as a quick game to play down at the pub.
Now you've seen what Monty Python Fluxx is all about, here's our breakdown and final score.
The Good Points
The Bad Points
Recommended Number of Players: 3
If ever there was a game to be enjoyed with a group of like-minded friends, Monty Python Fluxx is it.  It loses a little of the fun with just 2 players, but with 4 or more (the box advertises 2-6) it can start to drag on as players forget their own Goals and desperately vie to just keep eachother from winning.  If everyone's in a mood for an epic length game of absolute silliness, however, then a large game of Monty Python Fluxx can be a great way to spend an hour.
Average Game Time: 20 minutes
Monty Python Fluxx is difficult to put an average game time on due to its random and unpredictable nature.  We've played games which have been over in a matter of minutes, and some which have gone in in excess of an hour and a half!  20 minutes is a good, solid, average time though.
Replay Value: Medium
Whilst Monty Python Fluxx is a good wind-down game, it is something that players have to be in a specific mood for.  It's certainly one to go back to, just perhaps not on a regular basis.
The Future: n/a
Each version of Fluxx is its own game, and as such the contents of the box are all you'll ever get of Monty Python Fluxx.  However if you've enjoyed the mechanic then there are several other themed Fluxx sets to choose from, including Zombie Fluxx, Oz Fluzz, Martian Fluxx, Cthulhu Fluxx and Stoner Fluxx.
Price: £12
Monty Python Fluxx will set you back roughly £12, which is a thoroughly decent price for a stand-alone card game.  The various Fluxx sets seem to be standard fare in most specialist game shops, so even if they don't have the set you're after then they should be able to get their hands on it quickly.
OVERALL SCORE: 3/5
If you enjoyed this article and want to see more of the same, come and like us on our Facebook page to keep up to date with our reviews, as well as our general day-to-day ramblings!
Posted by Rob Hall at 22:00

Buy us a cuppa!

Kickstarter: Support up and coming games! 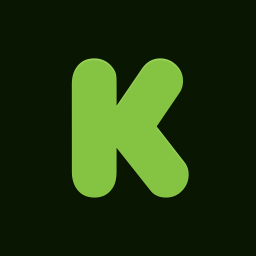 Keep up to date!

Flavours of the month